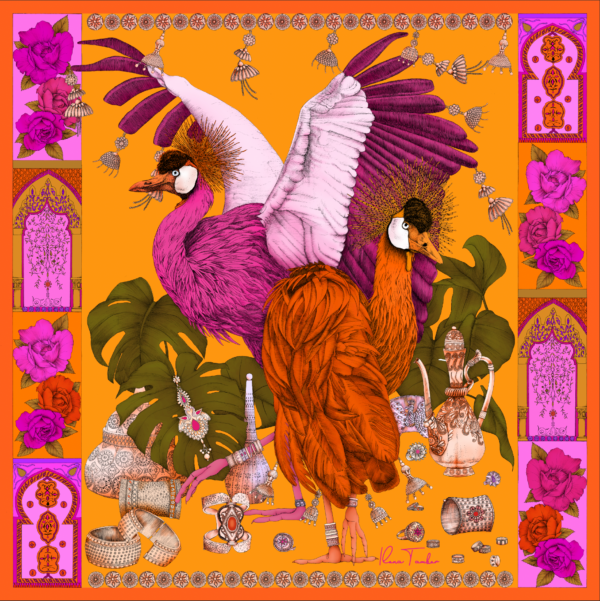 I have just finished new design “The Grand Treasure of African Crowned Crane” Design will be available on beautiful silk twill fabric in 3 colours versions. If you interested in pre-orders just send me an email. Have a look on all colourways and enjoy digital walk throught the illustration on the Instagram.

Read the story… behind this illustration.

When looking past its beady-eyed stare, there’s an ancient sense of knowing that lies beyond the eyes of the African Crowned Crane. Ever-aware, its eyes are always on the lookout, making sure that no creature trespasses into its realm.

But what lies within the realm of the African Crowned Crane? Its regal crown suggests that these creatures belong to an ancient line of royalty, one that migrated over deserts, plains, and savannah and captured within their soul a sense of the world and all its wonders.

Perhaps it’s this long history of remembering the world and the African continent as it was, and is, that gives the African Crowned Crane its particular treasure. It’s a treasure that was once sought after by many who passed through the Crane’s lands. Some have seen its red and white colouring around those steely-blue eyes, adorned by its golden, almost thorny crest and knew that the Crane and its kind kept something from the world.

Treasures, trinkets, gems and jewels – are these the treasures that those seek from the African Crowned Crane? Or does this somewhat surreal winged creature dare you to look beyond, warning you of the lure of worldly riches with its call? Some say that its appearance invites a wandering of the consciousness, prompting one to seek spiritual riches and the connections between their world and the natural, finding the intricate geometry and archway entrances to deeper meaning.

The Grand Treasure of the African Crowned Crane began as a hand-drawn sketch turned digital illustration. This design invites the eye with its exhibition of winged grandeur contrasted by the metallic tones and floral accompaniments. Available in three, lively colour variations, this pattern is either a reminder for the seeker or a symbol of riches. Or both.